(October 3, 2012 – Los Angeles, CA) Aleph Records is proud to release Lalo Schifrin: My Life in Music, a four-CD boxed set of music from the legendary composer’s career in film, jazz, and classical music.

The set, available November 13th, features music from three-dozen films, jazz and symphonic pieces composed by Schifrin, and unreleased music from films including Charley Varrick, The Beguiled, Joe Kidd, and Coogan’s Bluff. Along with over five hours worth of music, a forty-eight page book is included with archival photos and notes. BUY NOW

Director Brett Ratner (Rush Hour, Red Dragon) describes Lalo Schifrin as “one of the greatest composers that’s ever lived. He understands how to move an audience emotionally. There’s nobody hipper than Lalo.” 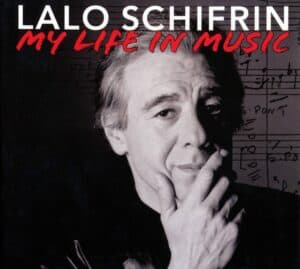 “It takes a certain skill set to compose for orchestra. It takes a different one to write and play jazz. It requires yet another to conduct a symphony orchestra. And the ability to handle the complex craft of writing music for moving images is still another. For one man to have mastered all of these – and excelled at them for more than 50 years – is exceedingly rare. In fact, practically unheard of.” – Jon Burlingame

“Spanning fifty years of accomplishment, Lalo Schifrin: My Life in Music is a tapestry of diverse composition; a mosaic of tone and color, honed and shaped with the maestro’s precision,” said the set’s producer Nick Redman.

“I have been very fortunate in having the opportunity to compose music in the jazz, classical, and film/television genres during my career,” said Schifrin. “This box set is a very broad sampling of some of those works. It is an opportunity to share some well-known pieces and discover new music as well.”

This four-disc set spans music from all aspects of Mr. Schifrin’s career, from the early beginnings of his film music to the big hits that include Mission Impossible, Dirty Harry, Enter The Dragon, and Bullitt. Also represented is music from his jazz and classical compositions including work commissioned by Dizzy Gillespie, as well as the Grammy-nominated Jazz Meets The Symphony series.
His music is a synthesis of traditional and twentieth-century techniques, and his early love for jazz and rhythm are strong attributes of his style. “Invocations,” “Concerto for Double Bass,” “Piano Concertos No. 1 and No. 2,” “Pulsations,” “Tropicos,” “La Nouvelle Orleans,” and “Resonances” are examples of this tendency to juxtapose universal thoughts with a kind of elaborated primitivism. In the classical composition field, Schifrin has more than 60 works.
Schifrin has written over 100 film and television scores including Mission Impossible, Mannix, Cool Hand Luke, Bullitt, The Cincinnati Kid, Amityville Horror, Enter The Dragon,four of the Dirty Harry films, and more recently Abominable and the Rush Hour trilogy. Lalo Schifrin has now won five Grammys® (twenty-two nominations), one Cable ACE Award, and six Academy Award® nominations.

“To borrow Gary Owens’ inspirational title from 1968, there’s a whole Lalo Schifrin goin’ on. Was then, is now, and will be for a long, long time.” – Jon Burlingame